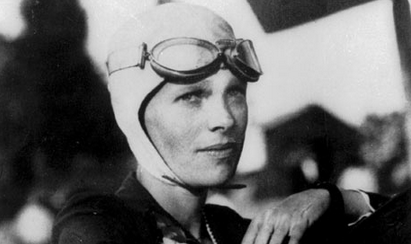 Amelia Earhart was born on July 24th, 1897 in Kansas, USA. She was one of the first women to be given a pilot’s license and she performed many notable flights and achieved a number of firsts – including being the first woman to fly across the Atlantic Ocean. She was also the first person to fly over both the Pacific and the Atlantic Oceans. However, when she was attempting to circumnavigate the globe in her plane, she mysteriously disappeared.

Earhart had a top team of navigators and pilots with her on the circumnavigation attempt, including Captain Harry Manning, Fred Noonan, and Paul Mantz. All were highly experienced, as was Earhart. They planned to take off from Oakland in California, then fly west to Hawaii, and across the Ocean to Australia. Then they would fly back over India and Africa and to California. The plane took off from Oakland as planned but suffered an accident or pilot error when taking off from Hawaii. With a newly repaired plane, Earhart started a new journey, this time flying east. She flew across central and south America, and then landed in New Guinea. The plane and the pilots disappeared when attempting to navigate to a small island between Hawaii and Australia.

What Happened to Earhart and the Plane?

Several theories have sprung up surrounding the last days of Earhart and the consequent loss of the plane. These relate to articles that were found on a Pacific island including tools, clothing and a jar of cosmetic freckle cream – Earhart was known to be bothered by her freckles. Some people believe she was on a spy mission and was captured by foreign troops, or that she was on a suicide run and deliberately crashed the plane. However, the most likely theories claim that Earhart ran out of fuel, or they landed without anyone’s knowledge on a remote island, where they died.

Even with the many years of investigation into the subject and countless thousands spent researching the case, there is still no light at the end of the tunnel and no solution to the mystery. Groups like The Stratus Project continue to investigate, however, in the hope that further information will be found that will solve the mystery of Amelia Earhart. Investigators point to the similarities in her story to that of the Malaysia Airlines disappearance – how could a plane simply vanish, after countless hours of searching and many personnel looking for the plane and possible survivors? Obviously, it is too late for Earhart now, but hope still remains for the passengers of MH370. In the future, investigators hope to put systems in place that prevent these tragic mysteries every occurring again.